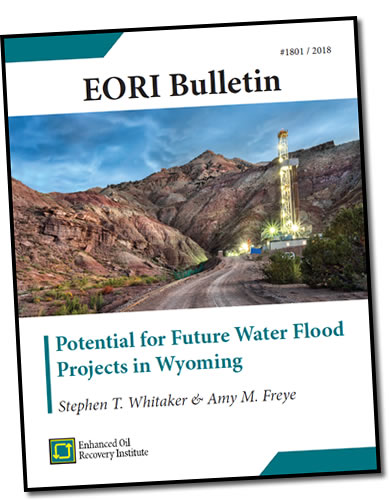 Wyoming, perhaps more than any other state, is dependent on revenues generated from the development and sales of minerals within its borders and has a vested interest in ensuring that its resources are properly and efficiently exploited. Maximizing the efficiency of oil and gas production in Wyoming is one of the primary goals of the Enhanced Oil Recovery Institute (EORI). Potential methods or practices that can improve or enhance the recovery efficiency of oil and gas production in the state are of paramount interest. Likewise, those policies or practices that hinder such efforts are also important to discuss.

Wyoming has nearly one billion barrels of proved oil reserves, a significant portion of which is still on primary production. Assessing the potential for secondary recovery from current oil fields is always a daunting task and requires evaluations regarding whether any given field will respond favorably to secondary recovery efforts.

This paper makes general assumptions regarding the feasibility of using a water flood to enhance oil recovery in a field based on publicly available data. The conclusions resulting from these assumptions are meant to be a guideline for the potential of future water flooding and are not meant to provide detailed evaluations of any given field’s ultimate recovery.

The selection process utilized for this paper is understandably simplistic and generalized. It is meant to provide a guideline on the magnitude of the number of fields that are good candidates for secondary recovery and of the reserves expected from initiating new water flood projects in Wyoming. This paper was never intended to provide a definitive amount to either candidate fields or expected reserves.

As with any such endeavor, generalities used in the assessment process result in a lack of detail. There are undoubtedly fields that may be viable candidates for a water flood but were excluded due to factors such as the way data are reported or due to the fact that the criteria used are inadequate to account for all the variables and situations that are present. As an example, a field with many wells and multiple pay zones has commingled production. This field may have an isolated reservoir that produced the bulk of the oil and would respond well to secondary recovery but when the average production per well is calculated on a field basis the cumulative production per well fails to meet the criterion of 20,000 BO per well. Additionally, a field may have been subjected to a water flood and is therefore eliminated from the list even though closer scrutiny would reveal that a different and economically attractive pay zone within the field was not flooded.

In the final assessment, there are ample candidates for future water flooding projects in Wyoming. The candidate oil fields contain significant reserves that can be extracted economically at minimal risk and should be attractive to any number of operators. Maintaining access to boreholes that can be utilized for a water flood is critical to any future improved or enhanced oil recovery projects.