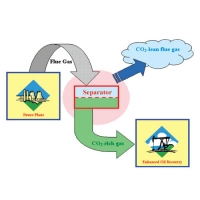 This work is motivated by the need for inexpensive carboncapture technology for combustion-based power plants. Such power plants produce electricity by converting coal or natural gas to carbon dioxide (CO2), which is normally vented as an 11%-12% component of flue gas that contains a balance of nitrogen and other minor components. Separating CO2 from such a flue-gas mixture poses no special technical problems for the known absorption, pressure-swing adsorption (PSA), and membrane technologies. However, these technologies have a tendency to be expensive for two principal reasons: the hot flue gas is produced at low pressure and the separated component (CO2) is highly dilute with an inert component (nitrogen).

This suggests a need for compression, which is very expensive, because one must compress the entire flue gas mixture with plenty of inert nitrogen in it, for example, to increase the CO2 solubility in an amine or other solvent solution, to increase its sorption in pressure-swing adsorption (PSA), or to create a driving force for its transport across the membrane. All these absorption, adsorption, and membrane approaches have been well-documented (see, for example, the reported work of Herzog and Drake,1 Mimura et al.,2 White et al.,3 and Aaron and Tsouris4). The main directions of research aimed at future innovations are focused on developing novel CO2 separation materials, such as ionic liquids,5 ionic polymers,6-8 and nanosilica and nanotube composites,9-11 just to mention recent examples from our laboratory; however, this is an active field of research in many other laboratories.

One of the more popular research directions has been PSA using zeolite X13 and activated carbon, but only for sorption at elevated pressures (at least 2 bar). Zeolite 13X has higher capacity, but activated carbon is less expensive than zeolite and insensitive to moisture.20-26 Its surface properties can vary considerably, but its approximate pure-CO2 sorption capacity can be as high as 10 wt % and its carbon dioxide/nitrogen (CO2/ N2) selectivity is on the order of 10, at 1 bar and 25 °C.12-15 Other types of carbonaceous sorbents, such as charcoal and coal, have been studied in a different CO2 context;16-19 however, they have not been explored or proposed for carbon capture from flue gas yet. For example, in the context of displacing coal-bed methane with CO2, it has been shown that virgin coal has a higher capacity for CO2 than it does for methane,19 again, only at elevated pressures. However, there are no references to low pressure flue-gas CO2 sorption coupled with thermal regeneration.

Although a typical destination of the captured CO2 is commonly envisioned to be some form of passive geologic storage or other storage type, this work is also motivated by a vision of utilizing the captured CO2 to displace valuable oil and coal-bed methane stranded in mature reservoirs, as illustrated in Figure 1, before storing it permanently in spent reservoirs. Such a CO2-driven displacement is referred to as enhanced oil recovery (EOR) and enhanced coal-bed methane recovery (ECBMR). The advantage of CO2-EOR over a conventional water displacement is that, generally, CO2 is miscible with oil, which leads to a much higher oil recovery. The conventional coal-bed methane recovery calls for the release of massive quantities of environmentally objectionable water, to reduce the reservoir pressure that traps methane in coal seams. A CO2- ECBMR alternative is attractive because it can produce more methane in an environmentally sensitive manner, without much of the groundwater byproduct. Both CO2-EOR and CO2- ECBMR are examples of producing oil and methane energy that is not only “green” but also more plentiful and costeffective. However, both require a plentiful supply of “green” CO2 from power plants, which hinges on new cost-effective capture technologies.

The goal of this work is to explore a low-pressure Carbon Filter Process technology (patent pending), that is, an inline flue-gas filter that captures CO2 on a carbonaceous sorbent, and, specifically, to evaluate the capacity and CO2/N2 selectivity of model activated carbon, model charcoal, and model virgin coal, to scale them up to a Carbon Filter Process that can be integrated with an existing or grassroots coal power plant, and to estimate the cost of recovered CO2, relative to the conventional monoethanolamine (MEA) technology. While such a Carbon Filter Process is likely to be multifunctional in that it can capture the non-carbon pollutants as well, the model flue gas used in this work consists of CO2 and nitrogen only.