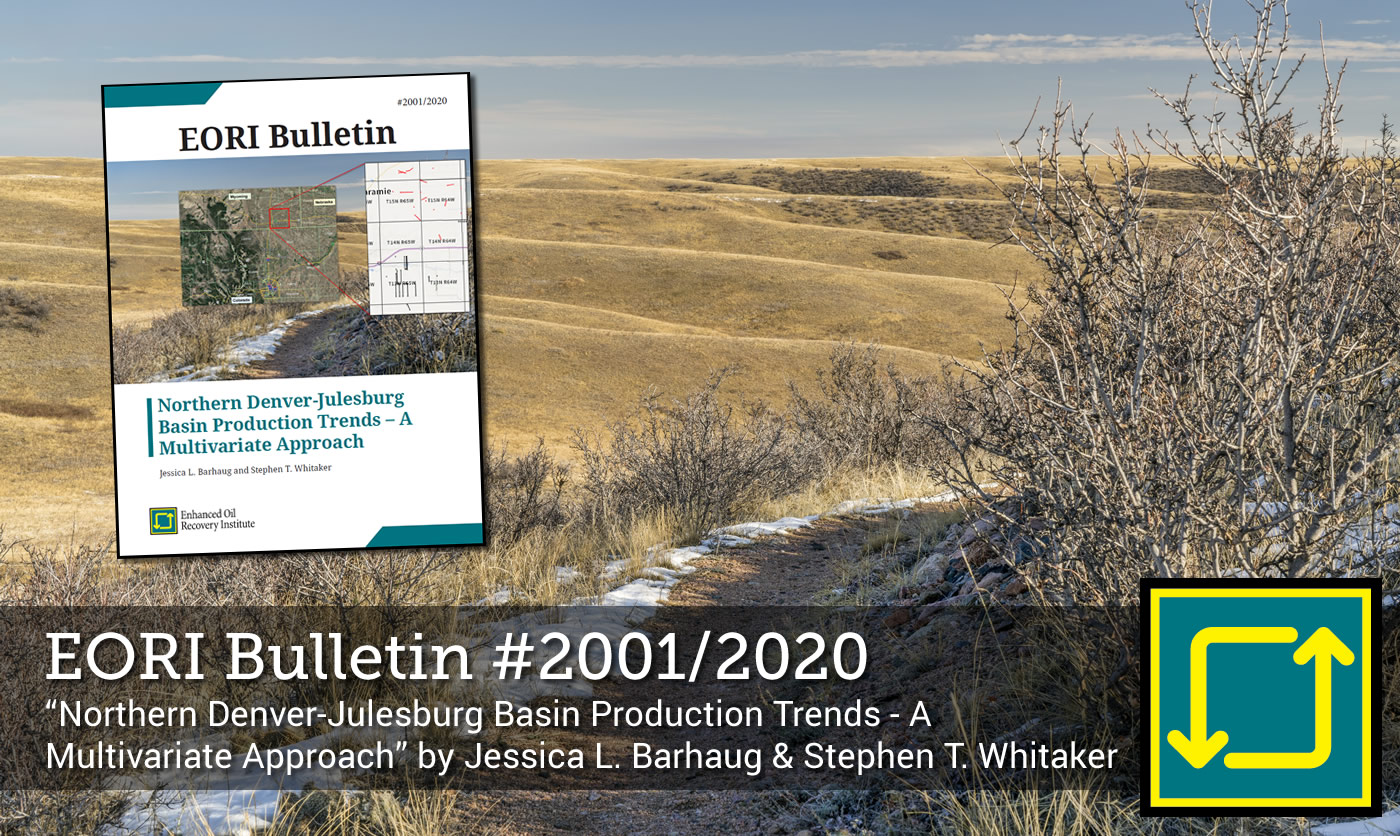 The Enhanced Oil Recovery Institute (EORI), University of Wyoming, in Casper, Wyoming has published a study highlighting the best practices for drilling the Codell and Niobrara formations of the northern Denver-Julesburg (DJ) Basin in southeastern Wyoming.

This work details how best practices were obtained through optimized design and yielded better overall economics when modeled.

The Enhanced Oil Recovery Institute’s Jessica L. Barhaug, Senior Engineer, and Stephen T. Whitaker, Technical Director and Senior Petroleum Geologist, are the authors of the paper, entitled “Northern Denver-Julesburg Basin Production Trends – A Multivariate Approach" published online April of 2020 on EORI’s website under the Projects tab.  Barhaug and Whitaker initiated the study to determine the ideal drilling and completion program for a targeted reservoir and evaluate the economic results.  The authors compared the current drilling and completion practices to analyze the main drivers behind cumulative oil production at different time intervals while simultaneously considering the economics that are influencing the decision makers.

To find the highest correlation to the actual cumulative production for Estimated Ultimate Recovery (EUR), Barhaug and Whitaker have identified the attributes that have the greatest impact on production making it possible to present an optimized well design.  Their modeling can also be used to test hypothetical scenarios to determine their impact on production for the purpose of comparing the return on investment (ROI) of different drilling and completion techniques.

The study raises an interesting point that many operators may simply use the methodology of what the “guy next door’ is doing regardless of a design based on observation trends derived from publicly available data.  The hope is that an operator’s data can be examined in conjunction with the results provided by this work to offer a good starting point for well design.

For the Codell, this study reveals the attributes of Proppant Volume, Horizontal Length, Gas-Oil Ratio (GOR), and Treatment Rate have the greatest influence on 6-, 12-, and 18-month cumulative oil production. By examining the individual attribute responses, the current best design in the Codell is a lateral length of at least 9,600 feet (ft), a job size of 12 million (MM) lbs, a treatment rate of at least 40 barrels per minute (bpm), and a GOR of 570 standard cubic feet per barrel (scf/bbl). The type curves from decline curve analysis provided predictive monthly production. The authors state “the best EURs were obtained with the optimized design and yielded better overall economics when entered into the economic model.”

Barhaug and Whitaker’s results for the Niobrara define “a 9MM lb job size with a lateral length of 10,000 ft, a GOR of 900 scf/bbl, and a treatment rate between 40 and 45 bpm is optimal.” Due to lack of available pricing data and the inability to generate valid type curves of production, an economic analysis could not be conducted for the Niobrara.

This study differs from a report published by the Wyoming State Geologic Survey (WSGS) in 2017 and reveals that simple crossplots are not sufficient to properly analyze plays where a number of variables must be addressed and weighed simultaneously.  The failure to properly analyze how multiple variables interrelate commonly leads to inaccurate conclusions.

In summary, Barhaug and Whitaker illustrate how, by looking at production from a multivariate approach, operators can determine which factors have had the greatest impact on maximizing production.

In the Codell, optimal well performance can be achieved by approximating:­

The economic model supports this proppant volume and the 12MM lb type curve has the best economic indicators in both a high and low completion cost environment.

For the Niobrara, optimal well performance can be realized by approximating:­

The EORI is committed to refining and continuing this effort in the Northern DJ Basin and in other basins throughout the state. Additional data gathered through operator engagement will be highly beneficial to the analyses. Please reach out to the EORI (www.eoriwyoming.org) with any questions, suggestions, or willingness to share data. Specialized analyses can be conducted to include proprietary data on a case-by-case basis.